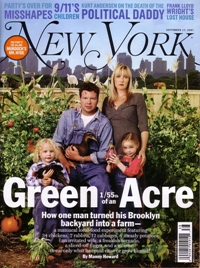 From the Hell Is Other People Files comes this great cover story from last week’s New York Magazine about a man who decided to take the eat local movement to the next step and tried to eat only out of his own back yard … in Brooklyn. On the cover, the story is billed as “Green 1/55th of an Acre,” though inside the title is “My Empire of Dirt,” (Manny Howard, 17 September 2007, pp. 22-29 & 107-108). A significant subplot of the story is just how much this little venture pissed off his wife. Mr. Howard recounts the following story:

Then came the last straw. The following afternoon, Caleb and I constructed most of a high-rise chicken coop in a few hours. We decided on a vertical design filled with ramps so that it would take up a minimum of the garden’s square footage (another concession to our urban setting). We equipped it with wheels and tracks so the poop could be removed from under it and the coop rolled back into place. The work was going well. At about 5:30 p.m., Caleb scrubbed up and got on his bike in order to get home in time to tidy up and attend his bartending class. At 6:30, I was putting the finishing touches on the rig. Inspired by the coop design in Nick Park’s animated film Chicken Run, I was using the table saw to mill eight-inch plywood into strips to make footholds for the entrance ramp when the blade of the saw tagged my right pinkie, destroying the second knuckle. Parts of my finger were left on the saw and on the ground.

I pried my cell phone out of my work pants using my left hand and, holding my right hand above my head, called Josh, a childhood friend who is now a firefighter and, more to the point, lives around the corner. He ran over immediately and field-dressed the mangled wound while I stood there scared—not so much of the wound, which I figured was not going to kill me, but of Lisa, who probably would. I expected her to come through the door with the kids at any moment. After another long day at the office, this would be quite a scene for her to stumble into.

Deciding not to take me to an emergency room, where we’d get stuck at the end of a long queue, Josh located a hand surgeon named Danny Fong on Canal Street, and he agreed to see me and my pinkie immediately. But before we could get out the door, Lisa turned up with Heath and Jake. Before even a hello, I said, as casually as I could muster, “Hon, I’ve banged my finger and I need to go to the doctor.”

She screamed in anguished frustration. She couldn’t just resent me for my silly folly; now that I’d maimed myself in the process, she had to feel sympathy too.

Behind every enthusiast or eccentric stands a spouse decidedly less than amused, doing their part to reign in these outliers of spirit. In some ways we all support one another, but in demanding support in return, we all collude in deadening each other.