Following on my previous post, my IRL friend Frank posted an excerpt from one of his class syllabuses that I think is a good, updated model of the role of the teacher (“A Note on My Teaching Philosophy,” Too Frank?, 29 August 2010):

I am much more interested in your ability to engage with such questions than I am in your ability to memorize series of facts. Unless specifically noted, you should feel free to consult your notes and texts for all assignments, including exams. Information is widely available. What is less common than access to information is the skill required to navigate, evaluate, curate, and interrogate that information. I am not here to dispense knowledge, but to facilitate learning. 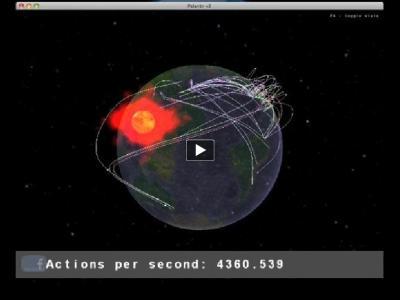 Jack Lindamood, one of the programmers at FaceBook, has produced a demonstration of an incredible tool that displays all activities on FaceBook geolocated on a rendering of the Earth. When he switches to a mode where it draws a line connecting the initiator to the recipient we get a view of something hitherto entirely invisible: a small subset of the noosphere being stitched together in real time.

I love it when he declares this “the Earth as Facebook sees it.” Then he switched to the wireframe view in which the Earth becomes just a grid for the information patterns that arc over its surface. Just as the geosphere becomes the platform for the biosphere and the biosphere becomes a geological force (Chown, Marcus, “Earth’s ‘Mineral Kingdom’ Evolved Hand in Hand with Life,” New Scientist, 19 November 2008), so the Earth is the grid on top of which the noosphere constructs itself, eventually becoming biological.

The Expanse of the Noosphere

Having all those icons stretching out into outer space looks impressive. But both the atmosphere and the crust of the Earth are proportionally thinner than the skin of an apple. And the biosphere is confined to an even narrower band than that. The noosphere’s region of activity is narrower still, with human activity limited to only a few score meters above and below the surface of the Earth. The noosphere has a tiny primary zone of hyperactivity, but tendrils reaching out to more exotic regions. Just as the biosphere is largely confined to the Earth’s surface, but extreme species inhabit the deep fissures of geysers, the bottom of ocean trenches subsisting on exotic metabolisms and at the bottom of mine shafts wherever we drill them and at whatever depth, so the noosphere stretches in tentative wisps far beyond its primary realm. Consider:

Time is out of joint and an epoch has an extremely long tail in both direction. One begins with imperceptible first movements, and similarly only finally passes away long after anyone has noticed. We might say that even while the noosphere is still only in the primitive stages of weaving itself together here on Earth, it has already become interplanetary and arguably also interstellar.

Over the Christmas weekend Frank advanced an argument in favor of Barack Obama that remains to my mind the top-line argument in his favor: that the simple fact of his election president of the United States will have a dramatic effect on the world’s perception of the U.S. Born in one of the middle provinces of the American empire (Hawaii) to a Kenyan father and a white mother, doing part of his growing up in Indonesia, with a name like Barack Hussein Obama, may people of the world may look at the new U.S. president and see something of themselves and of an America beyond the arrogant frat-boy entitlement of the Bush administration.

On the first episode after being strong-armed back from the writers’ strike, Stephen Colbert had Andrew Sullivan on to make the same argument (Colbert Report, Comedy Central, Monday, 7 January 2008):

If you show just that face of Barack Obama on television to some teenager in Lahore, Pakistan who has this vision of America that has been determined by the Bush-Cheney years, suddenly more than any word his opinion and view of this country will change. We have a chance to win those people over and make the world love America again.

With his cover feature in last month’s Atlantic Monthly (“Goodby to All That,” vol. 300, no. 5, December 2007, pp. 40-54), Andrew Sullivan perhaps the Senator’s most outstanding booster in the commentariat. But he is also about the most naïve of the astute political commentators, prone to enthusiasms that in retrospect look premature so I’m going to keep my own counsels.

The campaign for the presidency doesn’t end at the convention and the presidency is not just election night. After convention one has to face the Republican machine and after the inauguration there are another 1,460 days and I just don’t know that Senator Obama has what it takes in either arena.

Considing that the entire world expected a repudiation of George W. Bush on election night in 2004 and that we did not deliver, a more dramatic gesture is now in order. I like John Edwards because he is the most liberal of the top three, but with a woman and an African-American within striking distance, it would be a shame to send another white man to the White House.