As a part of my Whig Liberalism, I believe that Congressional supremacy is part of the Constitutional design of our system and I consider Andrew Jackson a villain of history and good governance insofar as he was able to go farther than any other president to reverse this proper ordering. The array of images, gestures and protocols that presidents have at their disposal to reify this Constitution-turned-upside-down version of tripartite government is myriad.

Among them, and one that constantly annoys me, is the protocol of congress-president relations. The president deigns to speak to Congress once a year, and then only as a pretext for a television spot; the president is never required to submit to Congressional questioning; when the president wants to influence Congress, he stays put at 1600 and sends some flunkey down Pennsylvania Avenue; but when Congress wants to deal with the president, not just some charging, but the members themselves go, and then not some junior Representative, but only the highest ranking members are allowed to participate. It sends a clear signal of executive supremacy and Congressional supplicancy. The king keeps his court. Presidential aloofness is a show of presidential authority.

I have been impressed with President Obama’s first week in office. On Wednesday he suspended military tribunals; on Thursday he ordered the closing of the Guantánamo Bay detention camp, acts of confidence in the U.S. judicial system to handle these issues and a surrendering by the executive of the power of judgment and justice to its proper place in the Constitutional order. One branch accuses, another adjudicates: that is the division of powers. Also on Wednesday he ordered full compliance with the Freedom of Information Act and rescinded former President Bush’s order allowing the executive branch to resist normal declassification of presidential records. (Glaberson, William, “Obama Orders Halt to Prosecutions at Guantánamo,” The New York Times, 21 January 2009; Mazzetti, Mark , “Obama Issues Directive to Shut Down Guantánamo,” The New York Times, 22 January 2009, p. A1; Stolberg, Sheryl Gay, “On First Day, Obama Quickly Sets a New Tone,” The New York Times, 22 January 2009, p. A1)

But of the things that have impressed me so far, none has done so much as his visit to Congress today to meet with the Republican caucus to explain, to answer questions and to advocate for the administration’s stimulus plan (Zeleny, Jeff, “Obama Visits Capitol to Press Republicans on Stimulus Plan,” The New York Times, 27 January 2009). This is how a president should behave toward Congress: as a co-equal branch.

I fear that Congressional Republicans plan on dealing the Obama administration a souring lesson on partisan intransigence in Washington, D.C. and that the administration will revert to presidential maximalism, but I hope (there’s that word again) that this is the start of a presidency of true consultation and of executive restraint. Such an example would be an accomplishment of its own. 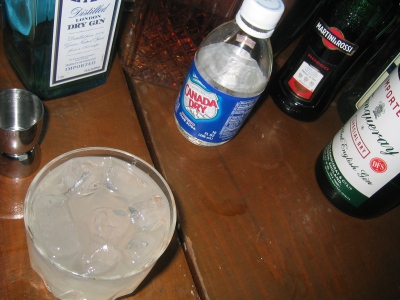 Happy Repeal Day everybody! Here’s a drink for Franklin Delano Roosevelt and the State of Utah that brought rampant boozing back to the United States.

I’m presently exploring the Tom Collins. I’m making it with fresh lemon juice and liking it somewhat less than the soda sweetness of the one made with the bottled mix that first introduced me to the drink over Thanksgiving dinner preparations.

I’m skeptical of drinks that require added sugar. I mean, with the alcohol they’re already sweet enough. I tried to omit the sugar from last night’s Tom Collins and found, like with drinkboy’s discussion of the old fashioned, not only is the sugar important, but dissolving the sugar in some water before adding the rest of the ingredients is critical too.

I inherited a subset of S.B.’s booze collection when she left for Ireland a few days ago so I am now in gin and tequila for the remainder of the year and then some so I am a happy kid. 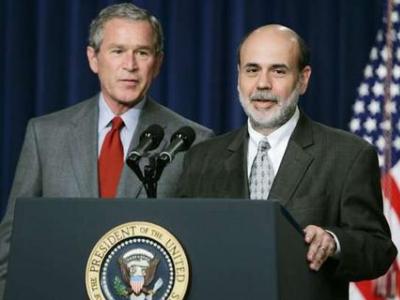 At the constitutional convention in summer of 1789 the founding fathers struggled to find an amenable compromise between those desiring a vigorous executive and those concerned about despotic overreach. One proposal to limit the executive was that instead of concentrating power in a single person, create a miniature division of powers by having a triumvirate of co-presidents.

Events of the past few weeks have been instructive. It would appear that the Federal Reserve Act of 1913 delivered us a co-presidency in a sub-constitutional manner. It would appear that they each have their own portfolio: one is commander and diplomat in chief and the other is the captain of the macro-economy. With his 20 year term, substantial independence, control over interest rates, lending capability, 800 billion in capital and a regulatory mandate over the banking system, the Federal Reserve Chairman has a vast array of powers, while not on par with the official executive, impressive nonetheless.

It’s also worth noting that, like the official President, the Federal Reserve Chairman accrues perhaps the better part of his powers through reputation, as a focal point of attention and the judicious use of his own particular bully pulpit.

This has some potentially troubling implications, depending on where you fall on the democratic spectrum. In this regard, Will Wilkinson has some interesting ruminations on what he calls “the structure of the de facto American constitution” (“What’s an Incrementalist Market Liberal to Think?,” 19 September 2008; the previous post, “The Benign Rule of Ben Bernanke and the Ideal of Democratic Equality, 18 September 2008, along the same lines is also good too).

It’s also worth noting — something that has become apparent throughout the Bush years — that many of the constraints on the presidency are not official, but adhered to only out of tradition. When the situation warrants — or ambition allows — the executive is capable of blowing through its traditional restraint, erupting into a ferocious activism. When this happens in the realm of foreign policy everyone loves it. Nothing gets people excited like a little kicking of foreigner ass. When it happens in the domestic or economic realm, people aren’t so enthusiastic, as Congressional telephone lines, recently clogged with populist anti-high finance carping, will attest. 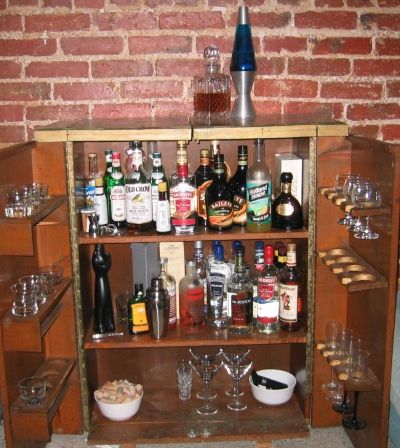 Dewars Scotch has the brilliantly targeted (at me and my ilk) advertising campaign of promoting the notion of Repeal Day (Dewars | independent), celebrating the end of prohibition. That’s a holiday I can get behind!

Fittingly Franklin D. Roosevelt, the last president to have been photographed with a cocktail and a cigarette, ran on the repeal of prohibition, signed the Volstead Act legalizing the brewing of beer and presided over the repeal of the Eighteenth Amendment. On 5 December 1933 Utah, of all states, ratified the Twenty-First Amendment to the United States Constitution ending prohibition. Another reason that FDR is one of the best presidents in U.S. history!

It’s snowing out and the bars in D.C. all suck so I will probably be staying in, but while setting the scene for the photograph above, I happily came across a forgotten bottle of now thirteen-year-old Glenlivet single malt scotch: the kind of thing to keep you warm on a winter night. Sorry Dewars, but your promotional failed on me as I will be drinking the competition tonight.