There are two perennial memes, critical of web 2.0, social networking and mobile devices, that keep appearing in my various feeds (Um, kinda ironic that you’re expressing your Luddism through JPEGs). They are these two: 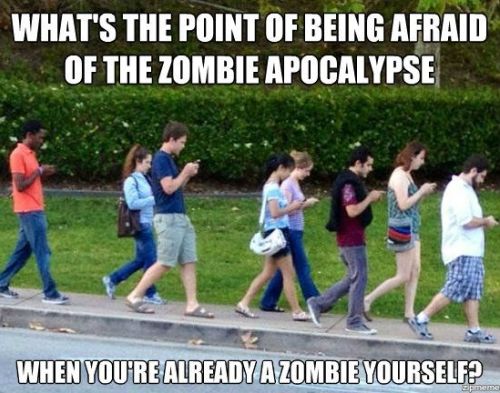 Of course as is the case with the web, the second one isn’t even true. Einstein did say something similar to this, but it was with respect to the atomic bomb — the legitimacy of which is beyond reproach — not cellular telephones.

To anyone who’s posted “the real zombie apocalypse” or this purported Einstein quote: nothing is profound or incipient on its own. We are capable of finding and making such experiences where we will. Technology is as capable of beauty and the sublime as any other experience in life.

In this respect, Apple’s recent advertising campaign serves as a wonderful reply:

Of course, this is corporate propaganda, but this is an instance where what makes this such an effective advertisement is just how well it has captured the truth of an experience. One of the things that I love about this commercial is how it is composed of a number of episodes, each of which show a aspect of this particular technological experience: noticing in greater detail textures and objects that would have warranted less attention in the past but that are uniquely beautiful (weathered wood, oil slicks), being the laggard in a group for capturing an image, the foodie thing, handing cameras to and retrieving with gratitude cameras from strangers, selfies, etc.

And before you go dismissing other people’s interests too quickly, I think your children and your pet are boring.

Now that I’m spending time doing research for my thesis at the Library of Congress Manuscript Division and the National Archive, I’m really wishing that the fictional manual / memoir that serves as Daryl Zero’s voice-over in The Zero Effect were a real book that I could consult:

Daryl Zero is for me a guru on par with Yoda, Keisuke Miyagi and Ogami Itto.