My friend Mick alerted me that Carl Zimmer was featured in a recent episode of RadioLab dedicated to the subject of parasites (Abumrad, Jad and Robert Krulwich, “Parasites,” 7 September 2009). Despite being somewhat annoying in format and low-density in it’s information presentation, the show contains a number of points interesting to my project.

In the second part of the second segment (starting at 31:25), they deal with the symbiosis between hookworms and the human immune system. The segment consists of a profile of Jasper Lawrence, a man who had severe allergies and — having chased down a certain direction of research — decided to travel to Cameroon to infect himself with hookworms. The research in question is that of the hygiene hypothesis: the notion that many developed world afflictions, including allergies, result in part from the excessively sterile human environment. Asthma is 50 percent less likely in a person who has had a hookworm and in Africa allergies are almost entirely unknown. It is theorized that similar to the dependence of digestion upon a symbiotic relationship with non-human microflora of the digestive tract, the immune system is dependent on certain microorganisms for regulation and calibration of the immunoresponse. The complex chain of events that is the immunoresponse evolved in the constant presence of parasites, evolved around parasites; they have co-evolved to the point where their presence became necessary. “We function like rainforests; we’re ecosystems,” Mr. Lawrence says. This is the hypersea washing through humanity.

The final segment is on Toxoplasma Gondii (starting at 47:55), a parasite that lives in cats and makes their feces dangerous to pregnant women. Like many parasites, it has a multi-phase lifecycle that takes place in a multiple hosts. It only reproduces in members of the Felidae family (cats), but can live the remainder of its life in any warm-blooded creature. T. gondii is expelled by cats when they shit and the cat shit is ingested by other creatures (consumption of unwashed vegetables, inhaled while digging close to the ground — which is why pregnant women are advised against gardening). T. gondii needs to get back into the digestive tract of a cat to reproduce, so it wriggles its way to the amygdale, the part of the brain responsible for emotional reaction, and causes the host to become attracted to cats, thus, in the case of small mammals or birds, becoming easy prey for cats (it is Carl Zimmer’s argument in his book, Parasite Rex that in this way parasites are like ecological catalysts, spinning food webs ever more tightly together).

But then there is the question of humans. It is one thing to say that T. gondii might make a bird or a rat suicidal. But T. gondii infects humans too. What then?

The scientific interviewee for the segment is Robert Sapolsky, a professor of neurology at Stanford University. On the question of T. gondii altering human behavior, he declares it highly plausible:

Sapolsky: Pure speculation, but people who think about this stuff view it as not purely speculative. The notion that toxo can produce some sort of attraction to cats in humans: they don’t think it’s all that crazy.

That’s right: crazy cat lady is that way because she’s been body-snatched by toxoplasma gondii.

Less controversial than the idea that T. gondii might be making crazy cat people out of us is the idea that it can make people more prone to engage in risky behavior. Dr. Sapolsky mentions two independent studies that show that people infected with T. gondii are two to six times more likely to get in a car crash than those not infected. With this information in hand, host and guest make the larger point:

Ellen Horne: It might be possible — might be possible — that toxo is guiding our emotions, changing who we are in some basic way. And if you consider that toxo might just be one of thousands of tiny little parasites inside us, pulling our strings from the inside, well that thought is pretty creepy.

Sapolsky: Even if the entire lesson with toxo is that a small subset of infected people now have one half of one percent more likelihood of wanting to drive really recklessly, even lurking in that one half of one percent are some serious implications for thinking about free will. We haven’t a clue the biology lurking in the background that makes free will seem a little bit suspect.

I’m less concerned with that old philosophical saw of free will versus determinism, than with extending an idea from segment on the hookworms. Mr. Lawrence says, “We function like rainforests; we’re ecosystems.” Presumably he is referring to our bodies. But the implication of toxoplasma gondii is that we are ecosystems in out minds as well. To the naïve sort of homunculus, Herman’s Head notion of consciousness, we must now add a few animal spirits.

Update, 23 October 2009: For instance this woman must have a pretty severe infection of T. gondii.

Update no. 2, 5 June 2010: Parasitogenic felinophilia (Toxoplasma gondii) may be treatable with haloperidol, an antipsychotic (“A Game of Cat and Mouse,” The Economist, 3 June 2010). Repost from my twitter feed.

It’s one thing to recognize that the properties of the component aren’t those of the composite. But on the positive side and in the interstitiary of this seemingly commonplace observation lies an entire world. The fallacy of composition is perhaps the first and the most important recognition on the way to systems science. Characteristics don’t scale in a straightforward or linear way and emergent properties, complex systems, adaptation and evolution, ecology, intelligence and society1 are all the positive side of the recognition of the fallacy of composition.

I mention the notion of an interstitiary between components and composites because this distinction is often thought of as discreet and binary. That is, people imagine components and composites and no intermediate states. This is because when people think about the fallacy of composition, they tend think of a machine-type example, or one of substance and form, e.g. just because an ingot of metal is pretty durable doesn’t mean that a precision machine made of metal parts is too. But emergence-type phenomenon are a unique kind of composition not captured in the machine analogy of component and composition.

A machine is made of heterogeneous parts and that is misleading here. Each part is relatively property-thin and by themselves are just a collection of odd shapes. It is only when completely assembled that the function of the whole is manifest. Structure is everything in the machine. Intermediate states between parts strewn on the table and complete assembly accomplish nothing. Minor deviations from proscribed structure accomplish nothing. And the whole is efficient: that is, it is specifically designed to minimize emergent or any other extraneous characteristics. Design and emergence are at odds here.2

Emergence, complex systems, et cetera come about from collections of more or less homogeneous corpuscles interacting in a largely unstructured way.3 The major difference here is that while the machine has no or few remarkable intermediary states, scale is all-important in systems phenomena, which tend to display differing and unique behavior at various scales. And where the machine is highly structure sensitive, complex systems tend to be robust in their various states.4

The key is that more is different (nearly the motto of the discipline).5 The common sense imagining, prior to the fallacy of composition, is that things scale in a linear way. More means more of the same. Then there is second order sophistication about scale. People add in the notion of a discontinuity. Things scale until they reach a certain threshold, at which point there is a discontinuity. More is different. But this is still a relatively binary conception with simply two sides of the discontinuity: one side of the discontinuity where the logic of linear growth prevails and the other where that of emergence or complexity prevails. There is a third order sophistication about scale where the binary view of second order thinking is still too simple; where the relationship between scale and properties is continuously variable.

As opposed to these simpler first and second order notions, continuously variable growth and development happen through many phases distinguished by differing logics or marked by different epiphenomena (something more like the imaginary graph above). As a system or network gains in members or in interactions, one set of behaviors becomes strained and unstable as it approaches the upper-bound threshold of the given logic. The threshold crossed, the previous logic gives way to a new logic. The pattern repeats, with the new logic holding for a period, but it too petering out in favor of a subsequent logic. And so on. Or perhaps there are tiers of controlling logics operative simultaneously. There may be meta-epi-phenomena as the various transitions admit a pattern of cycling logics or a second order logic to their or relations.6 No behavior or sequence is fundamental to systems, or the process of growth or to any particular phenomenon. We should dispense with the idea of a sin qua non behavior of systems in favor of a continuum of potentially many different behaviors as a system grows and changes.7

I will make a few examples to demonstrate the changing relation of prevailing logic and a system phenomena under growth. 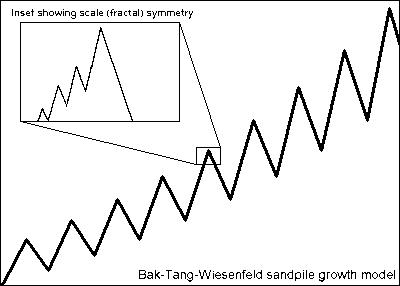 Instead of relying on the sort of intuitionism that says something like “We know that there has been a discontinuity in strategic thought because we read Thomas Schelling now instead of Helmuth von Moltke” we should dispenses with this intuitionistic approach in favor of systematic mathematical methods to analyze change — to determine when and where system effects are at work, which ones are at work, the extent of their range, the exact location of inflection points or discontinuities, where the logic of a tipping point takes over and the pace of accelerating assertion of the logic of the new régime, to study turbulence, islands of stability, equilibria, feedback and other patterns that can develop.9

I like Charles Mudede’s scaled down explanation of emergence (“Interlace in Dubai,” SLOG, 3 December 2008):

In the theory of emergence it is understood that complexity has a limit. For example, when the population of an ant colony reaches a certain point, 80,000 or so, changes begin to happen. Army ants swarm another colony or lots of ants move out and wander or start a new colony. What is clear is one behavior ends and another one begins.

I don’t know that he is right to characterize this as “complexity having a limit.” An emergent property is an aufhebung: a simultaneous preservation and transformation. The emergent property doesn’t sweep aside all previous behavior, but preserves the original behavior and builds a new layer or interpretive characteristics on top of it. I think of “the invisible hand” of capitalist markets here. People don’t stop bargaining when market clearing happens. People continue to negotiate, clip coupons, shop around, seek out sales, innovate, invest and compete. Market clearing is a second order interpretation of the ground level behavior that persists just under this interpretive overlay. Or in the example of the prisoners’ dilemma, the participants don’t cease to be rational outcome maximizes when the logic of suboptimum outcomes takes over. Their goals and reasoning stay the same. If anything, by preserving all the original complexity and adding a superstructure of new behavior, emergence is complexity unbound from its first order confines.