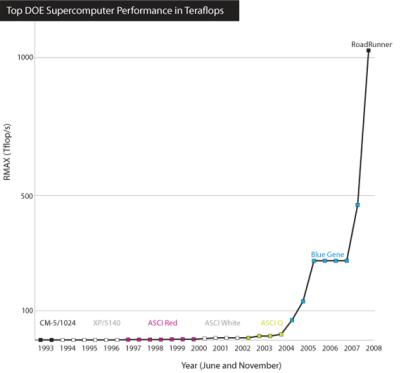 The machine was built in conjunction with IBM. It consists of somewhere in the neighborhood of 3,500 compute nodes with each node consisting of two AMD dual core Opterons, four PowerXCell 8i processors for extra floating point capability and 24 GB of RAM. Overall the machine consists of 6,912 AMD Opterons, 12,960 IBM PowerXCell 8is and 80 terabytes of RAM. It will have access to a file server with 2,000 terabytes of hard disk storage. Roadrunner occupies approximately 12,000 square feet and cost $133 million. The AMD Opterons are a common desktop PC processor and the PowerXCell 8i is the processor from a Sony PlayStation 3. It runs RedHat Linux as its operating system. As Robin Harris from ZDNet points out, because the better part of this machine is off-the-shelf components, this really represents the commodification of supercomputing (“PS3 Chip Powers World’s Fastest Computer,” Storage Bits, ZDNet, 10 June 2008; “Roadrunner’s Backing Store,” StorageMojo, 11 June 2008).

RoadRunner will be housed at the at Los Alamos National Laboratory and will be used by the National Nuclear Security Administration to perform calculations to certify the reliability of the U.S. nuclear weapons stockpile through highly detailed simulation rather than conducting nuclear tests. Mr. Lewis at ArmsControlWonk has more on the implications of this for the U.S. nuclear testing regime. He points out that questions about the ability of the NNSA to certify the U.S. nuclear stockpile using simulation were a central issue in the Senate rejection of the Comprehensive Test Ban Treaty. So maybe reconsideration of the CTBT will be on the agenda for the next President and Congress?

But this is all detail. The important point is the graph of peak computing performance of DOE supercomputers. It is clear that the singularity is near.

As Mr. Lewis points out, the fastest supercomputer used in nuclear weapons simulations has, not coincidentally, historically also been the fastest supercomputer in the world. This tight coupling between computing and nuclear weapons is striking. It’s worth noting that the first computer, ENIAC, though not yet tethered to the nuclear establishment, was constructed during the Second World War for the purpose of calculating ballistics trajectory tables for Army artillery units. As J. Robert Oppenheimer said,

In some sort of crude sense, which no vulgarity, no humor, no overstatement can quite extinguish, the physicists have known sin, and this is a knowledge which they cannot lose.

The singularity is near. It is more likely that it will be a cataclysm than a boon.