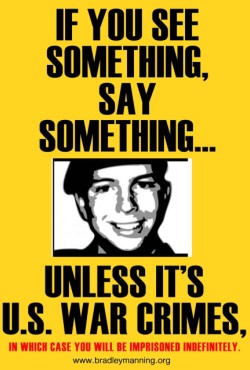 The thing to know about Bradley Manning and Edward Snowden is Sir Thomas Gresham’s principle that bad money drives out the good. So long as the government continues to prosecute a secret war beyond the principles on which this country was founded, people of conscience will continue to come forward with these kinds of revelations. We cannot drill into young people the American mythos and require new recruits into government service to take an oath to support and defend the Constitution of the United States against all enemies, foreign and domestic without planting the seeds of the very dissidents we now simultaneous seek to suppress. At some point the government will figure out how to screen out people of conscience, after which time our secret wars abroad and the surveillance state will be administered by scoundrels and unthinking bureaucrats. That power corrupts is as true of institutions as it is of individuals. Bad money drives out the good.