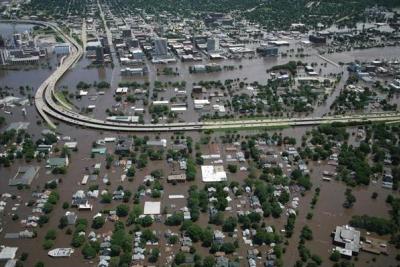 We’re not even getting the worst of it, just the feeble remnants, but still, the waves of storms that have been blowing through D.C. have been terrifying, violent, disruptive events. They have been apocalyptic, with the sky darkening and the air becoming restless as the storm approaches. Last week the street lights all came on at three o’clock in the afternoon, so dark had it become. We all gathered at the windows watching the oncoming storm in amazement. We looked across to the neighboring building where the occupants of nearly all eleven floors gathered at their windows too. I’ve lived in D.C. for five years now and I have never seen storms so violent as these.

A few days ago S. said that it turns out that New Orleans wasn’t the U.S. city that got wiped off the map, but rather, merely the first U.S. city to be wiped of the map. And in the perverse logic of the greenhouse effect, where the weather becomes not generally hotter or colder or wetter or dryer, but variably more extreme in every direction, I’ll bet by August the news of flooding has been replaced by stories of drought and wildfire.

It was pretty easy for middle-American public figures to be smug about climate change when it was just sinful, elitist coastal cities that were going to be destroyed by rising sea levels. But it turns out that the gods make no distinctions among we mortals between the righteous and the wicked. Climate change will come to the heartland just as much as it will to the decadent coastal cities.

Just as in Iraq, people tend to contrast the costs of a change in direction with the costs of doing nothing as if doing nothing were free. There are no costs to the status quo. The right digs out all these numbers about the drag on the economy of various plans to prevent climate change, but it is presented as if it were an absolute, rather than a comparative cost. Do nothing and continue along that same unencumbered glide-path to prosperity; change direction and it’s the road to serfdom. In fact, there has even been a spate of articles as of late on how climate change is going to be an economic boon — at least for some. But one no longer needs a month of simulation time on a supercomputer — a window and a cable subscription will suffice — to see that there are coasts to doing nothing.