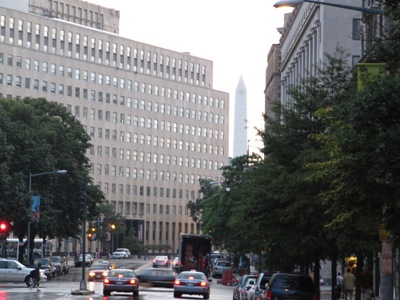 Washington, D.C. is a miserable town and I am known to go on and on over the how and why (If D.C. is so miserable, why have you persisted in living here for six years? I plead complacency). But let me set that aside and say something nice about D.C. for once.

Something that I love about Washington, D.C. is how occasionally, when I don’t expect it, if maybe I get a little turned around in a neighborhood that I know less than others, or where I don’t have its relations to the adjacent areas down quite right — and I’m not saying that it happens all that often — but occasionally, all of a sudden the Washington Monument will pop into view where it’s totally unexpected. I don’t mean something like the view down 16th Street toward the White House, with the Washington Monument slightly off center, monumental kludge, throwing off the meridians of the district. That’s too obvious. I’m not saying that it happens all the time and that you can see the thing everyplace you go in town. If fact, it’s strange for all the height limitation and surrounding hills and all, for how much of the territory of D.C. the Washington Monument is not a presence at all.

I’m thinking of the obscure, peek-a-boo moments. The picture above is one of my favorite examples. This is the view from L Street NW, south on 15th, between the Export-Import Bank building (large blank facade on the left) and the Dana building (barely showing to the right). It’s such a narrow gap through which the Washington Monument appears that walking east, you come out from behind the corner of the building, cross the south-bound monumental sidewalk, step out into the street and have cleared the parallel-parked cars and taken your first step into the first lane of traffic before it pops into view. By the time you have traversed that first automobile lane, it’s already disappeared again behind the Dana building.

I’ve never been much of a fan of any particular architecture, but the play of building on building that comes from motion through a cityscape, the conciliance of many architectures that comprises a city is wondrous to me. Amidst praise, if I may briefly tack back in the direction of disparaging Washington, D.C., this is another place where the city comes up short. That said, the Washington Monument is a fun little game element of the cityscape in D.C.