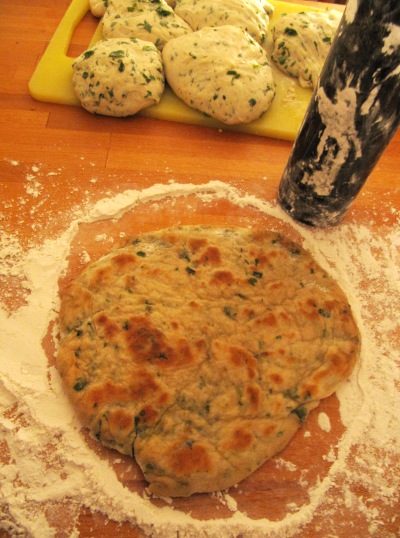 My first attempt at making naan. I used cilantro instead of garlic and made the usual vegan substitutions to the first hit on Google, the AllRecipes naan. It came out listing a little in the direction of focaccia, but good.

Improvisation: Any of the family of pan-based breads are good for me as the entire six years I’ve lived at this residence, the stove has not worked. I don’t own a rolling pin so an empty wine bottle had to substitute.

Early bread making lesson: if you used the last of the flower in the dough and don’t have any left to dust your rolling surface, pin or hands, then you must abort. Thankfully the “Convenient Mart” (that’s what the sign says) stocks more than the usual quick food items.