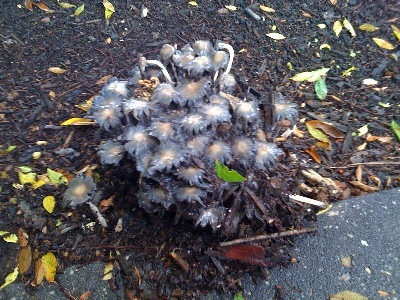 I’ve been working where I have for starting on my fourth summer, which means the same commute for approaching four years. Modern society is clockwork so the monotony is murder. I know all the timing on all the lights at all the intersections from the bus stop to the office. And it’s that way for everyone so I swear that I must step in front of the same guy preventing him from make the same right turn on red every morning.

But there are cycles with cycles, so with enough perspective there are higher orders of monotony. Every year for four years now, after the first summer storm this same nasty pile of mushrooms bursts forth from the sidewalk planter box on L Street NW, between 15th and 16th Streets, near the Washington Post building.

Most years they are normal mushroomy brown. This year they look bizarrely like some flower of evil native to Mordor.