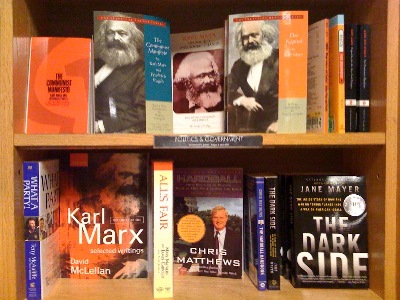 Well of course — this is just the media pushing its left-wing agenda. I doubt it. The media has their finger to the wind. During the Bush years they shamelessly kowtowed to Ari Fleischer’s admonition to watch what they write and now that the times are a’ changing, the media is putting up sails for new seas. The mood questioning capitalism is welling up from the ranks with the media wondering how to be relevant. Witness:

“Until 2004, we sold less than 100 copies of Das Kapital per year,” Schuetrumpf [managing director of the Berlin-based publishing house Karl-Diez Verlag, publisher of the German edition of Marx’s collected works] said. “In the 10 months of 2008, we have sold more than 2,500 copies. It is clear that people are interested in learning what Marx has to say about why capitalism does not work.” (Godoy, Julio, “Economy: Turning the Pages Back to Marx and Keynes,” Inter Press Service, 7 November 2008)

And from the picture above, apparently Borders thinks there’s enough interest amidst their customers to turn the Marx collection face-out.

Craziest of all, according to a recent Rasmussen survey, a whopping 20 percent of Americans currently believe that socialism is superior to capitalism (“Just 53% Say Capitalism Better Than Socialism,” 9 April 2009).

During the Cold War, Americans’ strongest association with socialism was the Soviet Union, and after the collapse of communism we were told that left-wing economic ideas had been roundly refuted by events. So the right currently believes itself to be effectively tarnishing the program of President Obama by labeling him a socialist. But it turns out that the existence of the Soviet Union wasn’t just culture jamming socialist ideas, but the negative associations that it generated was lending undue credibility to right-wing ideas as well. The collapse of communism may end up not so much taking left-wing ideas down with it, as depriving those of the right of their cudgel of existent socialism. The association of socialism with Stalinism has lost its effectiveness now that the Soviet Union has become just another historical anecdote. This might explain the even more pronounced positive view of socialism among young respondents in the survey (33 percent of young people favor socialism versus 20 percent among the general population).

Republicans would be advised that in constantly pointing to the popular President Obama as the primary exemplar of socialism, the outcome isn’t so much to tarnish President Obama so much as to burnish socialism in the minds of the young generation. “If Obama is socialism,” they think, “I guess that makes me a socialist.” (Yglesias, Matthew, “The Declining Unpopularity of Socialism,” ThinkProgress, 9 April 2009).