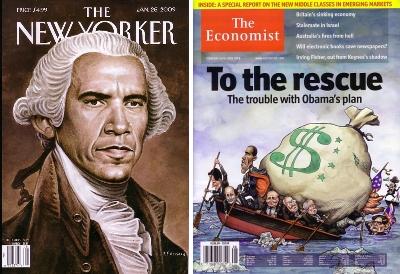 See what I’m sayin’. A lot has been made of President Obama’s appropriation of Abraham Lincoln, but why stop there. Obama is the every-president. The 26 January 2009 issue of The New Yorker put Drew Friedman’s illustration, “The First” on the cover and the 14 February 2009 issue of The Economist has for its cover a parody of Emanuel Leutze’s Washington Crossing the Delaware, both featuring Barack Obama as George Washington.