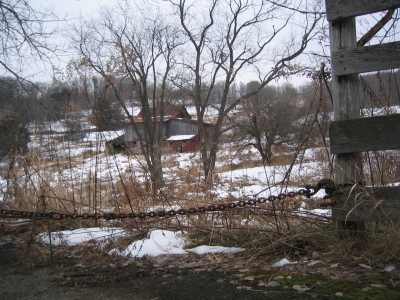 We just got back from visiting S.’s family in Pennsylvania for the New Year’s weekend and lo, the first post of the year. We did some hiking around the family farm when the cold let up a little yesterday afternoon. It started snowing early in the evening and went hard all night. We spent yesterday morning digging out the cars and clearing the driveway.

The New York Times has an article yesterday on the conflict between advocates for untrammeled nature and off-road vehicle riders (Barringer, Felicity and William Yardley “Surge in Off-Roading Stirs Dust and Debate in West,” 30 December 2007). Someone like David Brooks who advances a scaled down version of red-state, blue-state stereotypes might suggest that this is a case of urban elites looking down their noses at the unsophisticated enthusiasms of the rabble. The article itself tells a much more mixed story.

This is pretty much the way that it is up here in Pennsylvania. The W. family has lived on their hilltop farm for eight generations and in the last few years there has been an invasion exurban types from New Jersey towing trailers of four-wheelers behind their new Ford F150 pickup trucks up to their second country places (I’m not exaggerating here: we passed a few on the way back down as we do on nearly ever trip). None of them have much by way of property — certainly not enough to support their four-wheeling ways — so they crossover onto the W. farm and ride over the hills and dales of its remote corners. The W.s put up no trespassing signs and erect obstructions along trails but a sign doesn’t do much in the face of determination and the riders have gone so far as to bring chainsaws in with them to break up the obstructions that the W.s have built.

The East with its preponderance of deciduous trees is quite different from the Northwest. The spring is so much more green and the autumns are breathtaking, but during the winter, when the entire countryside is this dull grey of naked branches is a bleak contrast. I have come to think of the winters as insufferably colorless, but while driving around this weekend I noticed for the first time where the color remains. The trees may go but the grasses of the fields remain. It tufts up and is wind-swept so it lays across the fields in waves. It has turned yellow with the season and intermixed with the browns of low withered weeds making the fields a bold yellow-umber color. Everything is damp so it acquires a richness of color and a bit of a glint. The wintry fields are stunningly beautiful.

When I visited Paris it was over New Year’s and as the plane descended towards Charles de Gaulle airport we flew over a number of similar swaths of wintry fields. The color and the coarseness of the grass struck me. I thought at the time that a little exposure to European landscapes would go a long way toward an education in the color pallets of certain European painters. But it now seems to me that similar colors abound in the United States as well. Perhaps it is the combinations or the preponderant colors that is the difference.

Alas, this is another way that rural America is disappearing. It probably used to be that you would drive through this country and it would be nothing but farm fields, working or fallow. But increasingly the tangled yellows of straw and hay or anarchic fallow fields are being replaced by well manicured green suburban lawns. One can really see how anemic and unimaginative the standard suburban lawn is next to the unkempt yellow fields behind a weathered grey split rail fence.