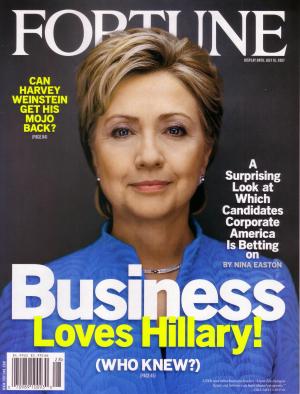 One of Hillary Clinton’s most important courtships began early last year, around a formal dinner table at Georgetown’s Four Seasons Hotel. Her targets were Morgan Stanley CEO John Mack and his wife, Christy. Mack was already active politically — but on behalf of Clinton’s political opponents. A Bush “Ranger,” he had raised at least $200,000 for the President’s reelection bid and was one of the most prominent business names on GOP donor lists. At one time his name had circulated as a potential Bush Treasury Secretary.

The conversation that night ranged widely, but always returned to one subject: health-care reform. …

Hillary Clinton was on familiar territory — and managed to charm the couple not only with her “intelligence and educated responses,” as Christy Mack recalls, but also with her one-on-one charisma. “You have these preconceived ideas about people you see in the public eye,” says Christy. “But we were extremely impressed with her ability to connect with every single person. She was an amazing listener, with tremendous warmth.”

The relationship could have ended there — a New York Senator engaging her local constituents. But early this year Clinton upped the ante with a phone call to the Morgan Stanley CEO, asking him to support her presidential bid. When he demurred, she asked for a meeting. Once again — this time over coffee — John and Christy Mack found themselves enticed. When Mack returned to his office, he told Nides he was ready to commit. “John, you can wait, you don’t have to commit yet,” Nides responded. “No,” Mack replied, “early support is better support.” Days later Mack picked up the phone and sealed the deal. Clinton, Nides recalls, “put the time in.”

On the one hand, this bodes well in that some have pointed out that Senator Clinton has nowhere to go but up and when people are exposed to Hillary Clinton in person instead of Hilary Clinton the myth, they are pleasantly surprised. On the other hand, one would really like to know what Senator Clinton could say (or maybe even promise?) to a Bush Ranger — in 2004 nonetheless — about healthcare that would cause him to back her for the presidency.